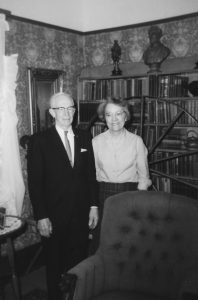 Norman Clinton Stork was born in October 1883. In September of 1921, he married Meda Dyson in Aitkin, Minnesota. Clinton was a successful employee at H. B. Fuller Company and the couple lived in St. Paul during the 1920’s. One of the hobbies they enjoyed together was antiquing which took them on excursions across the state. On one of these trip Clinton and Meda stumbled across the Ames-Florida house, and found that it was for sale. The couple fell in love with the house immediately despite the house being a bit rough and in need of some repairs. The Storks saw the potential the home had as a living museum, and Jessie Florida was deeply moved that the home could retain its history and place in Rockford. After some discussions, in 1937 Clinton and Meda Stork agreed to purchase the home from Jessie Florida along with the contents inside. While still living in St. Paul the couple began to restore, refinish, repair and replace the historic house and its contents with Clinton and Meda doing a large portion of the repairs themselves.

The Stork’s were firm believers that their home was to be shared with the public. In December of 1939, the Stork’s hosted their first Christmas party at the Ames-Florida-Stork house. During 1949 Clinton and Meda move from St. Paul to Rockford permanently, Clinton retires from Fuller Brush company after 42 years. The Stork’s used the home for the good of the community as well. In 1954 the hosted an open house posted in Minneapolis Tribune as a fund raiser for the Order of Eastern Star. What happened next was something very special. During 1956 children tours started in the house from Rockford, Buffalo, Delano, Monticello, Montrose, and Hanover. While Clinton and Meda owned the house over 3,000 children toured the home. Meda made sure that beside sharing the history of the home, she also wove in life lessons for the children. One example was the story Meda would tell about the toy blocks that were upstairs in the play area. These toys belonged to Clinton as a child. He was careful with them and took care of them, weaving in a theme of responsibility and thriftiness ever so subtlety. In 1960 Storks hosted a fundraiser to raise funds for scholarships that over 600 people attended.

1965 Clinton and Meda Stork were presented an award from the Daughters of Founders and Patriots of America, Minnesota Chapter for their dedication to sharing history with the youth our area. Over 1,000 elementary kids had toured the house in less than 10 years. Then in 1972 due to declining health the Stork’s had to discontinue tours at the end of the year. Meda and Clinton continued to live in the home until Clinton passed away in 1976. After his death, Meda stayed in the home that the couple had brought back to life. While tours were not being held, Meda continued to be involved in Rockford and the surrounding community. Her family helped with the upkeep of the home, but it was a lot to expect from the family to maintain a 130-year-old home. The home was offered for sale to the city. Much discussion occurred about the cost and maintenance of the home. In July 1986 Rockford City received and anonymous donation that covered purchase of the home from Meda Stork on condition that an Area Historical Society be formed to manage the maintenance of the house. Meda was relieved that a plan was in place to preserve the home Clinton and her shared with so many people. In September 1986, Meda passed away.