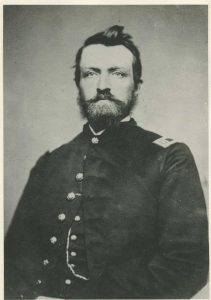 When Aaron Sprague Ames was born on December 30, 1827, in Chittenden, Vermont, his father, William, was 50 and his mother, Mary, was 44. In 1852 Aaron with two friends left Vermont with an oxen team and headed to California. They settled in Marysfield, California. He remained there until 1859 when he headed east, settling in McGregor Iowa. He enlisted in the Union army in 1862, was selected Captain of Company M 6th Iowa Calvary. He served three years and partook in several Indian battles in the Dakotas.
He married Sarah Forsyth in 1866 in Iowa. They had five children in 12 years. Aaron and his family moved to Rockford in 1872, to be near his brother George Ames who was in poor health. In 1901 the couple moved to Buffalo lived a long life of 89 years, and was buried in Rockford, Minnesota. After Aaron’s death in January of 1917 Sarah continued to live in Buffalo until she passed away in 1931.