In 2018, we dug one hole in the Stork House yard, where an outhouse used to be.  Why would we do that you ask?  Because, outhouses were also where garbage was thrown, and sometimes yesterday’s garbage is today’s treasure!  In 2019 we dug four additional holes.  Below are some of our finds, along with their stories.  Watch for future information on new displays of Privy Dig finds at the Stork House – to be developed. 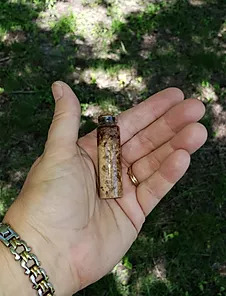 We suspect this is a medicine bottle.  What’s so interesting is it still has its stopper on, and is filled with a cream colored powder.  When I asked our diggers what they thought was in it, they said they figured opium.  Think about it: opium used to be used for medicinal purposes.  Ah, but times have changed!

This piece is a salt or pepper shaker, circa 1910.  It’s a beautiful blue.  Apparently its mate was still usable, as it wasn’t founds in the privy hole. 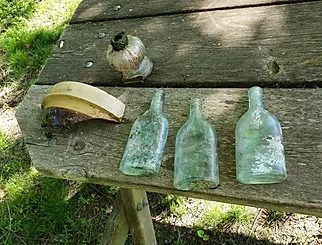 We also dug out another intact bottle, similar to those shown at the left.  It also was stopped and had an amber liquid in it.  Best guess?  Alcohol.  The assumption would be someone (a husband?) would have brought it home and someone (the wife?) wasn’t too happy about it.  Into the privy it went!  And now you know the rest of the story!