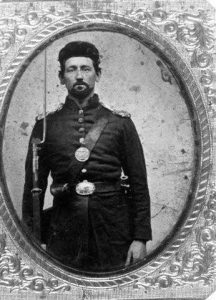 Benjamin was born February 3rd, 1831 in Williamson, New York to Elijah and Rachel Parmeter, one of 9 children. At the age of 27 Benjamin married Martha Ann Hopkins in 1858. As the Civil War started Benjamin enlisted in Company Batty C, New York 4th Heavy Artillery Regiment on 19 Oct 1861. Mustered out on 13 Nov 1862 for disability. Benjamin reenlisted in August 1864 with Company I of the 184th New York Infantry, promoted to Corporal in Dec 1864, mustered out June 1865.

After the Civil War the family moved west and settled in Rockford MN. There Martha and Benjamin had three more boys (Merton, Herbert and Charles) and one daughter. (Nora). Martha passed away on June 5th, 1898. Afterwards Benjamin moved back to New York living with family. In 1906 he married Mary Nichols. Mary died in 1914, Benjamin moved back to Wright County Minnesota and passed away in March 1915. 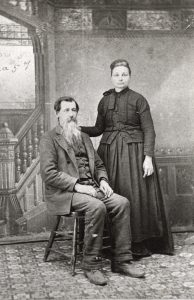