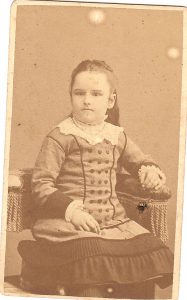 The last Florida to own the AFS House, Jessie spent her early childhood living in Minneapolis, where she also attended school. She isn’t listed in the Rockford-Greenwood area until the 1885 census.

When Jessie was only 6 years old, her father, Joel Florida, died. This event left his widow, Catherine, to support herself during uncertain economic times. Jessie’s older half-brother, George, returned to Rockford to purchase the lumber and flour mills from his uncle, which provided some income for the family.

Fortunately for Jessie, a father figure stepped into her life when her sister, Nellie, married in 1876. William Hatch and Jessie formed a strong bond that lasted throughout their lives, and gave her the opportunity to study at a high school in Oak Park and Rock Island, Illinois.

By the 1920 census, Jessie is still listed as living in Greenwood. She spends much of her time nursing her siblings, who all suffer declining health. Carrie dies about 1920 at age 60. George, now 72, suffers from a number of ailments that leave him paralyzed for several years and unable to operate the mills. Nellie passes away in 1925, one year before her brother, at age 79.

Now alone and unmarried, Jessie spent her time with civic and social groups, writing letters to friends, and travelling. The RAHS holds many of her personal letters, including the one reprinted below, written during her time living with Nellie in Illinois.