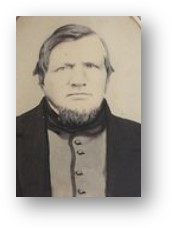 George Fuller Ames was one of twelve children of William and Polly Ames Jan 14, 1807 in Colchester, Vermont. In April 1841 Mr. Ames married Sarah Woodward in Boone County, Illinois. They had four children, three daughters passed away before turning two (Julie, Mary, and Sarah). Their one son, Frank died in Rockford at the young age of age of 21. Mr. Ames was the first of his family to come to Minnesota.  He first secured twenty acres near the present site of the Hennepin Co. Courthouse in Minneapolis. In 1855 Joel Florida came to Minnesota and in company with Mr. Ames discussed opportunities to start a milling business west of St. Paul in what was known as “The Big Woods”. On that same trip the two were joined by G.D. George. Three men together located to what would become Rockford in early October of 1855. That fall Mr. Ames left and returned to Illinois to gather his family with plans to relocate all of them to Rockford in the spring of 1856.  Upon his return, Mr. Ames started building the first store in Rockford in 1856 approximately on the corner of Bridge and Main Street. Prior to it being finished he sold it to Mr. Bascom who completed the structure which was 2 stories high. Mr. Florida, Mr. Ames and Mr. George started the first industry in Rockford, a Steam Sawmill August 1st, 1856. In 1860 Mr. Ames began the construction on his retirement home along the east bank of the Crow River. Built in Greek Revival style, Ames wanted his new home to be reminiscent of the gentlemen farmer’s houses in New England that were common during his childhood. Mr. Ames was not a believer in slavery, he brought the first black man to Rockford, George Washington. Mr. Ames gave George Washington a 40-acre farm which was about 5 miles south of Rockford as payment for his work on the house. Once completed, the house became known as “The Ames House”. In 1878 Mr. Ames sold his house to his nephew George Florida, the son of Joel Florida whom he established Rockford with. The Florida’s lived in the home for almost 60 years before selling the home and the majority of it’s contents to Clinton and Meda Stork.