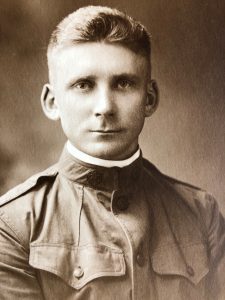 Albert was born on September 7, 1891, in Greenwood, Minnesota. Albert grew up on his father’s farm on county rd 50, approx. 3 miles east of Rockford. He was inducted into the Army on Sept 22, 1917 and trained at Camp Dodge Iowa. Albert set sail for France August 18, 1918 as part of Battery D, 337th Field Artillery where he served as a cook. The regiment was billeted in Nevers and Cosne France. Albert was honorably discharged January 19, 1919 by Captain Lyman.
After the war Albert married Selma Hauser on Nov 12, 1919 at Cross Lutheran church. Albert and Selma then took over the family farm The farm was 120 acres and they raised hay, corn, wheat, cows, horses, pigs and chickens. They were blessed with 3 sons and 3 daughters. Their first son died at birth in 1921 and the rest of the children were Norbert, Arlene, Bonita, Glen and Joyce. During this time Alberts on dist. 77 school board (Beacon School) and also played in the Rockford Band. Albert & Selma farmed there until 1945 when they sold the farm and moved to New Ulm. Albert passed away June 10, 1953 in Rockford. 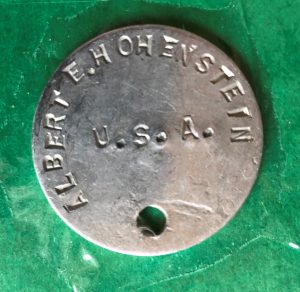