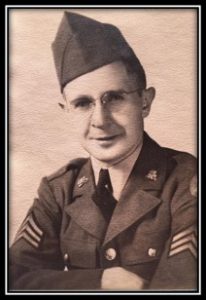 Walter was born just west of Rockford to Herman and Frieda Mutterer in 1919. He lived his whole life in our community. In October of 1940 Walter enlisted in the US Army and was stationed at Fort Snelling. In March of 1942 he was called into active duty. Walter was assigned to the 918th Ordinance Heavy Automotive Maintenance company where he was responsible for jeeps, halftracks, and transport vehicles. His tour of duty included Normandy, Northern France, Rhineland, Ardennes and Central Europe. His date of discharge was Dec 15th 1944. Walter returned to Rockford after the war and married Marilyn Schultze in 1948. Together they enjoyed bowling and won several awards. Walter was an original member of the Rockford Volunteer Fire Department which was established in 1948 and served for over 30 years, several as fire chief. In 1978 the Rockford Fire Department petitioned the city of Rockford to name the park in front of Maplewood Manor be named in honor of his service to the community.